There is a Holiday Activity Page happening right now on TSV.  To connect with the social area/community, the intent was to have drawing entries be submitted through the group set up for the activity.  A page was created, also, but the majority of the activity is taking place in the group.  I wanted to introduce those who have not visited the community to the latest version of the site.  A year ago, it became necessary to move to a new hosting service and re-do the site.  At the time, the technology was available, but was costly, to migrate all the information and, after taking a poll of the members, decided to start fresh.  Hopefully, the new format will be appreciated as a social media site dedicated to needlework.  I appreciate those who have remained loyal and welcome all who wish to be a part of the best online needlework community!

The first edition of the cross stitch activity, Mystery Stitch Bingo, started on July 5, 2018.  When I sat down to create the first design for this, I decided to use a 100 x 100 stitch chart and divide it into 25 sections with 20wx20h stitches each.  I had an idea of what I wanted to do, but got hung up on the 25 sections.  What was created was a "Summer Garden" themed design with 25 spot motifs representing garden features.  These included some water features.  I designed this based on the Sulky cotton petite palette that I used in my "April Showers" design.  I mainly did that because I had them on hand.  I believe that the participants enjoyed the activity.  There were pop-up prizes for days 1, 5, 10, 15, and 20.  The prizes were awarded to the person who first posted a picture of the stitched section for the day.  The grand prize went to Sandy W., who was the first to post a stitched picture of the entire chart.  The next of these will start on September 1 with a design from Rosewood Manor.  I thank Karen for her generousity to and support of The Stitchers' Village!!  Here is a representation of the July chart which will be avaliable as part of The Stitchers' Village Designs portfolio: 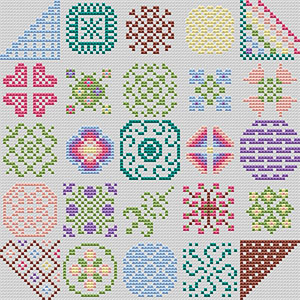 I was awake in the wee hours one night trying to come up with a way to improve the bingo games we have had on The Stitchers' Village in chat.  I then started thinking of an idea for a mystery stitch.  There is something to be said for the thinking process in the middle of the night.  TSV will be hosting a new activity starting July 5.  The Mystery Stitch Bingo will run for 25 days.  The chart will be divided into 25 squares.  Each square will be assigned a number to imitate with a bingo card.  On the first day of the activity, the middle "Free" space will be posted.  for the next 24 days, a random square will be posted.  After the last square has been posted, the first person to post a picture of the stitched piece will win the grand prize.  Anyone who posts a picture of any stitched portion of the project in the 5 days following the posting of the last square will be put into a drawing for some additional prizes.  The charts will be 100w x 100h (generally) and the daily posting charts will only be 20x20.  This should make it easy to catch up if you miss a day here and there.  I hope we all have a great time with this.

I will admit that, when I started working on the design, the idea of the 20 x 20 squares was stuck in my head.  I ended up with a spot sampler called "Summer Garden".  The "water feature" that is in the center is shown here. 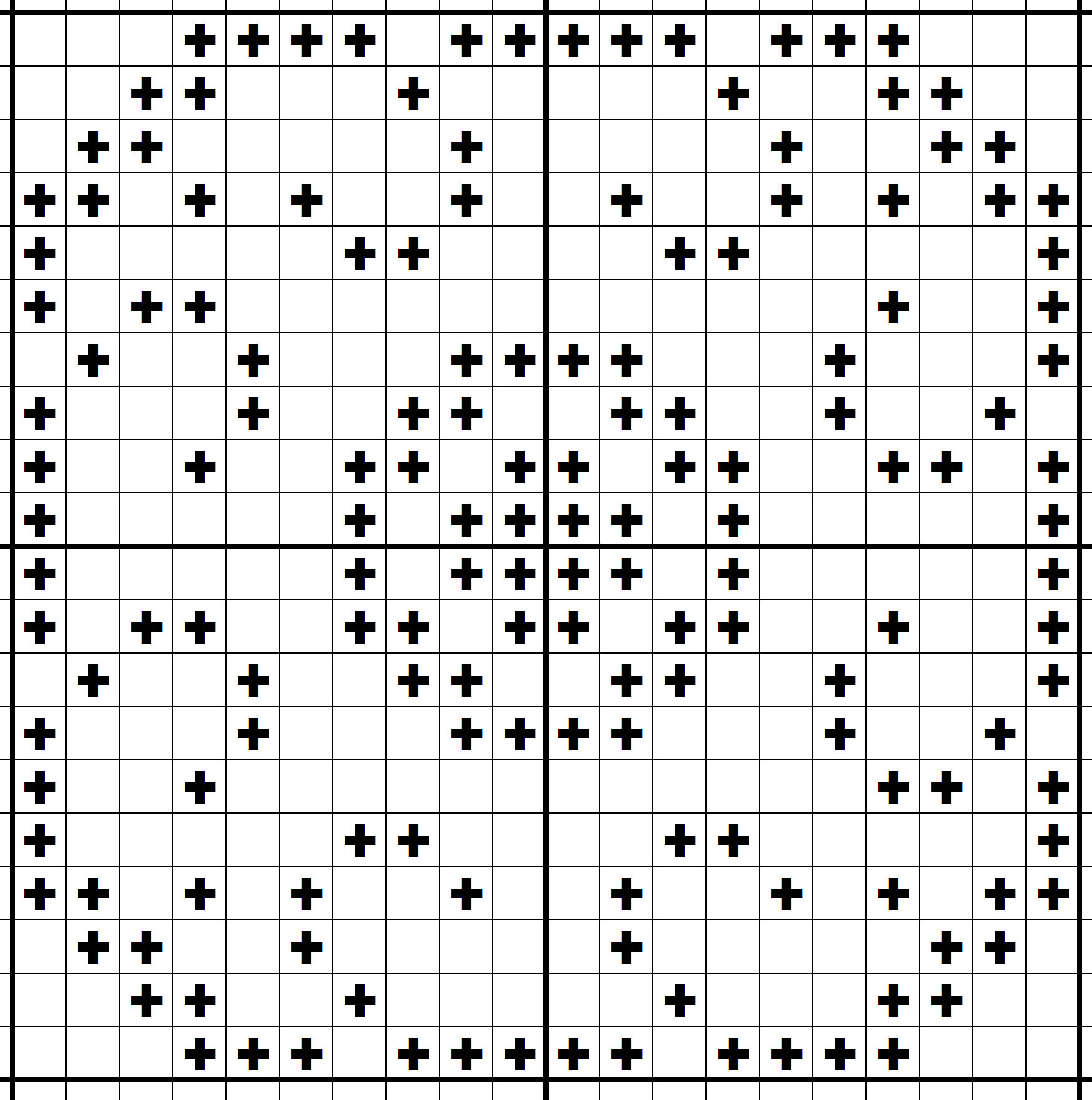 When I redid the site at the beginning of 2018, our membership in the social area dropped and I am working to get it built back up.  The community is a great place to interact with your fellow stitchers!!

The reconstruction of The Stitchers' Village site has been a much bigger project that anticipated.  I do have the layout so that it is consistent for the various portions of the site (resource library, designer studios, shops, and community) but am still adding content.  I realize the change is difficulf for some users.  I hope that this will be the final incarnation of TSV.  For my part, I have restored the clickable home page while utilizing the current software for web construction.  That has changed so much since the beginning of TSV that it is hard to believe.  It is also difficult to keep up with the changes.  The main issues from here on are that updates can sometimes cause disasters.  I learned that this past Thursday.  I had just completed the individual charts for the Collective Stitch.  I was preparing to upload my files (as recommended by my nephew who just graduated with an IT degree) when I got a message that the windows update needed to restart my computer.  Well, I thought, let me get that out of the way before beginning the upload.  WRONG CHOICE!  The update resulted in a blue screen error telling me to restore - unfortunately, Windows 10 does not create a restore anymore.  So, I called Windows tech support and went through the first phase of checking to be told my case needed to be upgraded and I would receive a call at 9 a.m. the following morning.  That did not happen so I called them and waited on hold for 45 minutes to be told that the 9 a.m. was actually a 2 hour window and I would receive a call by 11 a.m.  That, also, did not happen.  I discovered that I had purchased the extended service on my desktop when I purchased it at Best Buy.  I made an appointment with them for that afternoon.  They were able to retrieve my files (thank goodness) and I will know today if my hard drive was going bad and caused the issue or if the update had an issue.  With the first option, I will have to get a new hard drive and will lose all my software that was installed.  With the second option, I have a chance of them being able to get my computer back as it was.  Will I make a list of the software and all the purchase keys, etc.?  I hope I do not have to go through all the re-installs, but that will be the process if I do.  You know, when I add software I have the information but then start trying to figure out how to use the software.  I fully intend to print the key codes and put them in a file, and sometimes do.  I know for a fact that I do not have everything I need if I have to reinstall software, but will have enough to get me going!!